Our Voices of a New Renaissance concerts last weekend were a huge success. They were musically excellent and exciting, and the size and response of our two audiences were better than we’d even dared to dream. We ran out of programs Saturday night! We now have an official group photo:

And it’s on to Phase Two. Now that we’ve successfully launched VOANR, it’s time to plan for the group’s future. We want to make an even bigger impression with our next concerts, to reach new audiences and cement VOANR’s place in the Triangle’s music scene. To fund our January 31-February 1 Love and Loss concerts, we’re raising funds through a project on Kickstarter.

I’ve been a Backer to several (7, according to Kickstarter) friends’ Kickstarter projects, and I’ve always looked forward to being involved in a project of my own. So far it’s been a blast. First, N and I created a goofy project video. And then we launched our project — 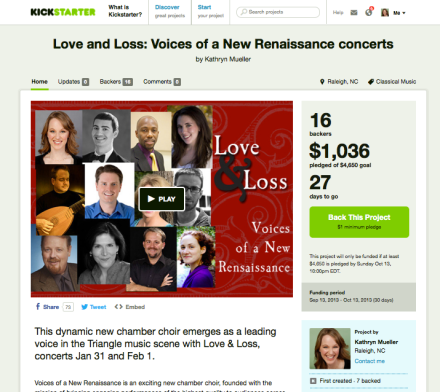 — and then we waited to see if people were as excited as we were, and if they’d become Backers.

The response has been overwhelming. The generosity of our fans, friends and families is thrilling, encouraging and humbling. In the first 72 hours we exceeded 20% of our goal. I’m pretty addicted to checking our project’s dashboard on Kickstarter’s site:

Now we just have to start writing amusing and informative email updates to our Backers, and to keep up the momentum until we reach our goal. Click here to see where we are.