When I flew back from Arizona last week my O’Hare to RDU leg was full of college-aged people, presumably flying back to their Triangle area schools to start another year. 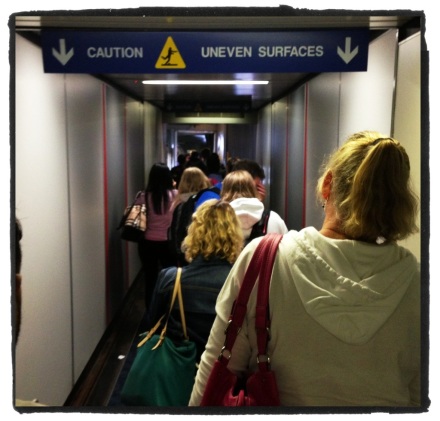 Late August usually makes me wistful. I miss the excitement and new beginnings that a fresh school year brings. My life operates on a calendar similar to the academic one since the concert season is generally September to May, but summer gigs bridge the gap from one concert year to the next, and it often feels like one continuous season of preparing and performing.

I’m not complaining about a steady stream of work, and this year I don’t have to miss the mild and strangely pleasant stomach quiver of those first school days either. I’m heading back to school…as a teacher! 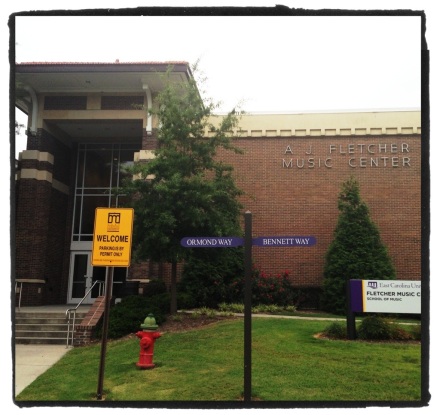 This year I’ll be teaching voice two days a week at East Carolina University. ECU has one of the best music programs in the state and I’m incredibly excited to join the staff there. I’m looking forward to working regularly with college level students and being part of a faculty with great colleagues with whom I can collaborate in performances.

I met all my students this week, and love them already. Since I’m new to ECU my studio is full of mostly freshmen, and that’s perfect. We can all figure out this college thing together. 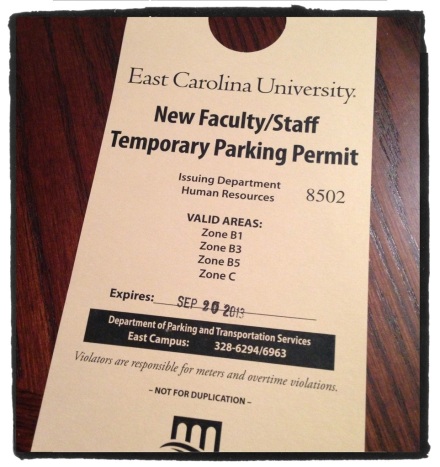 This is my dog Charlie:

When she’s not destroying stuffed toys, she’s generally being pretty cute and funny, like this: 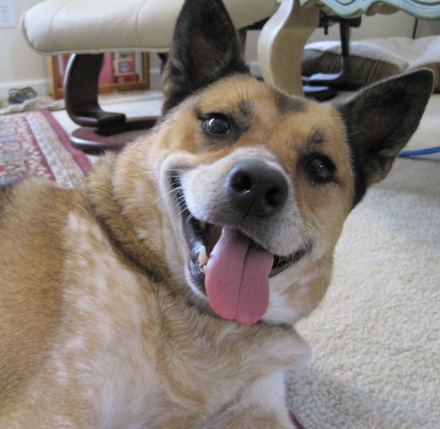 Being a cattle dog (mix), she’s very involved in all household activities, including practicing. When she was younger, she pestered me so much while I was practicing that I developed a routine with her. Now, once I finish my warmups she gets a peanut. She takes it away and leaves me alone after that.

But that means that she’s VERY attentive during warmups. She knows my usual final exercise and sometimes starts whining during it. While she’s waiting, on occasion she even sings along:

It sounds to me like she tries to match pitch, but my pro musician/proud momma perspective could be slanted…

Got any musical animal stories? Share them in the comments.

Just a short posting this week, but I promise cuteness. It’s great being back in the Old Pueblo and singing Dido and Aeneas again. I have a super homestay too: my parents’ house. It comes equipped with a friendly practice buddy, Lizzie. 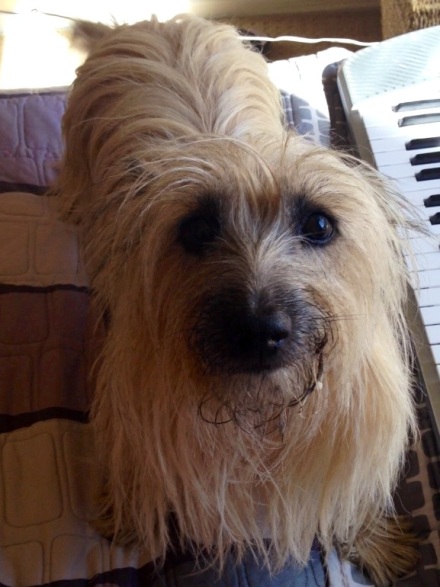 She doesn’t howl along with me like my dog Charlie does (more on that in a future post), but when I sing above the staff she starts to wag her tail furiously and then jumps up on me, trying to get close to the source of those weird, high sounds.

My first animated GIF! At once annoying and awesome

Last week in Santa Fe I didn’t just eat gelato (though I did plenty of that – oh stracciatella, how I miss thee); I soaked up much of what Santa Fe has to offer, including a night at the Santa Fe Opera. My father, N and I attended Rossini’s La Donna del Lago, starring Joyce DiDonato. 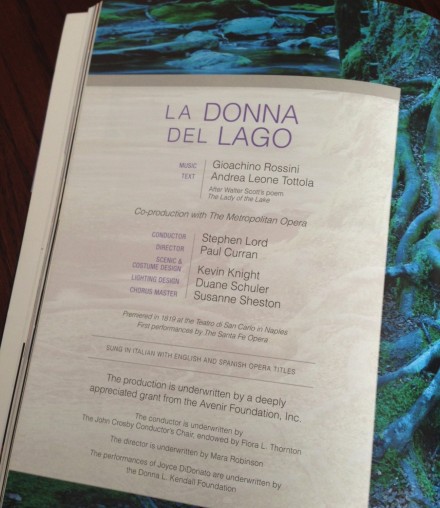 I was excited to see Joyce live, both because she’s a beloved former student of my teacher George and because she’s a great advocate for opera who reaches out to the public in various ways including her blog. It was a thrill to hear her virtuosity and musicianship; all the singers were excellent. Operas at Santa Fe are a magical experience, especially when the sun sets over the red, juniper-dotted hills behind the stage during the opening scenes, or when real lightning snaps across the distant sky during a moment of intense drama. 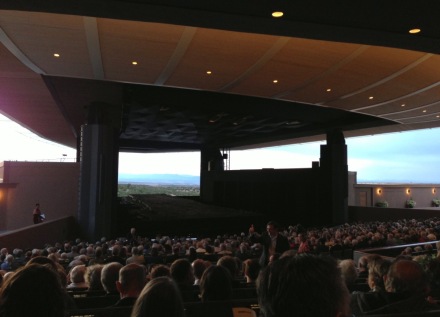 But, while its music was completely delightful (lots of great wind parts and wonderful, showy Rossini vocal lines), the opera’s story was boring. Like a majority of operas, it had a pretty dumb plot, and in La Donna nothing much even happened. Comic operas may have preposterous dramatic devices but at least they’re generally entertaining. Tragedies and romances, on the other hand, can be pretty darn static. Several years ago I saw Santa Fe’s production of Strauss’s Daphne. It was the most beautiful music I’d ever heard (and Erin Wall was incredible as the title character), but I found myself wishing they’d done a concert version because there was so little to work with dramatically.

I’m not sure why it finally dawned on me this time, but as I sat there it occurred to me that in the 18th and 19th centuries a boring plot wasn’t necessarily a bad thing. Before our modern concert-going etiquette was established, audiences talked among themselves, walked around, and played cards, perking up their attention for the big arias. The reason we find some operas tedious now isn’t just because our TV and Internet culture has reduced our attention spans, it’s because we’re expected to be quiet and attentive through all 3 or 4 hours of an opera that wasn’t written with our kind of audience in mind! It’s understandable that many members of the public don’t want to shell out $50-$100 to sit perfectly still and quiet, with other audience members shooting daggers at them should they dare to clap between movements, cough, or (heaven forbid) unwrap a candy to stifle that cough.

I think about this a lot, about how to inject some of the causal atmosphere of past eras into today’s performances, to make this old music not a museum piece but a living, evolving performance art. Of course, as a performer I don’t want people chatting or playing cards while I’m putting my soul to voice and delivering the culmination of hours of preparation.

But actually, would audience members quietly playing cards–or Angry Birds–be so bad? I don’t want to haughtily snort that question away. I pay attention when musical organizations do something different and it seems to work. I love Seraphic Fire’s 80-minute concerts with no intermissions. Letting audiences have wine or (non-crinkly) snacks during performances seems like a great idea. In most concert formats (though tricky in opera) it creates a connection when performers talk to the audience. I haven’t decided yet what I think of organizations like American Bach Soloists having “tweet decks”–seating sections where attendees are allowed to be on their smartphones but are expected to tweet enthusiastically about the concert–but it’s a novel idea. Crossover performances like this one which got a lot of heat in my circle this week:

are controversial in the classical world, but maybe we shouldn’t be so quick to dismiss them. If someone watches this video, then looks up Monteverdi on Wikipedia and decides to listen to more of his music, isn’t that great for classical music? If Monteverdi, musical revolutionary that he was, were alive today, would he possibly even dig that electric guitar? A cellist colleague of mine recently started a Facebook discussion about concert wear and whether it was time for male musicians to stop wearing anachronistic 19th-century formal garb (tuxedos) to work and come up with something more modern and approachable for audiences.

For decades people have been saying that classical music is dead, and somehow it lives on. There will always be a small percentage of the public who love classical music and are willing to pay for it, but I think we’re not doing our job as performers if we’re content to play only for them. It seems like a self-indulgent profession if we don’t at least try to reach out to new audiences and to make our music more accessible and affordable to them. To me this challenge isn’t a frustration; it’s an exciting opportunity to play and experiment.

I’d love to know what you think of this issue, and your ideas for keeping classical music continually relevant. Please leave me a comment and vote in the poll below.

This week I was on a family vacation in Santa Fe, one of my favorite places in the world and a city I’ve come to know through my years singing here with Santa Fe Pro Musica and before that the Santa Fe Desert Chorale. I could make a very long post with a list of all the things I adore about this place, and high on that list would be Ecco Gelato: 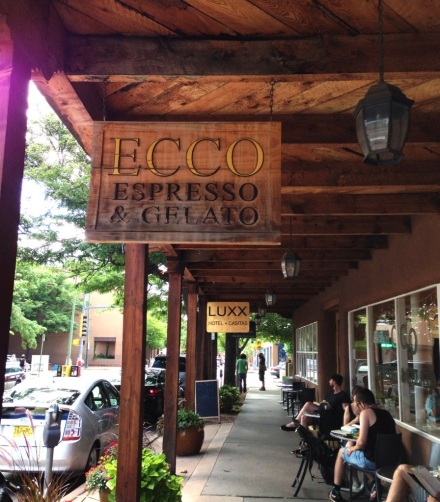 Having been lucky enough to visit Italy three times, I’m kind of a gelato snob. Last year during a food tour of Rome N and I learned how to tell authentic gelato from the fake stuff, which is made from a powder. Ecco’s delectable offerings pass the test: no frothy swirling above the level of the pans, no eye-catching slices of fruit or shavings of chocolate adorning the flavors, and no unnatural brightness to the green of the pistachio (here, pictured in excellent partnership with zabaglione): 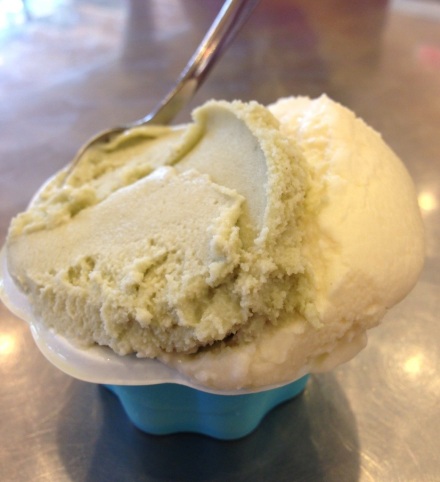 Ecco’s gelato makes me so happy, I decided to compose an ode to it:

Oh Ecco, your gelato is exceeding fair.
I love your many flavors, whether norm or rare.
Though far across these fifty states my taste buds roam,
Your gleaming case and tables are my heart’s true home. 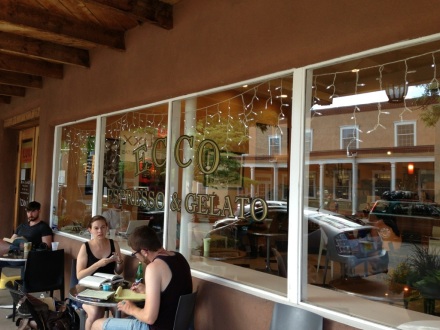 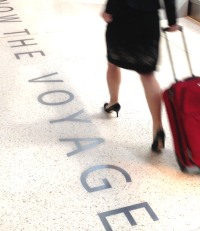