Lately I’ve had the luxury of lots of practice time to polish the music for my next month’s worth of gigs:

and work way ahead on some of my repertoire for next season: 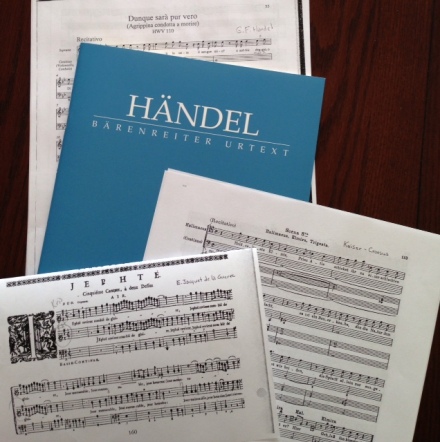 These are the tasty musical treats I alluded to in my last posting. This is all such good stuff! Every time I sidle up to my piano I have trouble deciding what to dig into first.

I’m particularly excited about the aria from Keiser’s opera Croesus. I decided I needed a German baroque opera aria to round out my rep list for period group auditions. Um, there’s German baroque opera? you ask? It’s certainly not in the canon of mainstream opera companies, but it did exist (check out the praise the Boston Globe and  NYT heaped on Handel’s Almira this year at BEMF), and luckily my trusty network of Facebook friends who are baroque opera nerds helped out with several suggestions.

I chose Elmira’s aria “Liebe, sag’, was fängst du an?” primarily because I could get my hands on it without leaving the house; there’s a decent full score of the opera on IMSLP (let’s take a moment to give thanks for IMSLP). It also happens to be fabulous, with a beautiful lyrical A section and a fiery B section full of coloratura. It’s not long, and leaves lots of opportunity for flashy ornamentation on the return to A. Pretty much the perfect audition aria. You can listen to Sandrine Piau’s rendition here:

But, I haven’t gotten far in learning it because the vocal line in this score is written in soprano clef. Drat!

Copyists and printers of the past must have really hated legder lines, because they used a number of now-obsolete clefs to keep most of the notes on the staff. In facsimiles of original scores or even in 19-century editions like this one, soprano vocal lines are frequently written on soprano clef, with Middle C being on the bottom line instead of on the first ledger line below the staff. 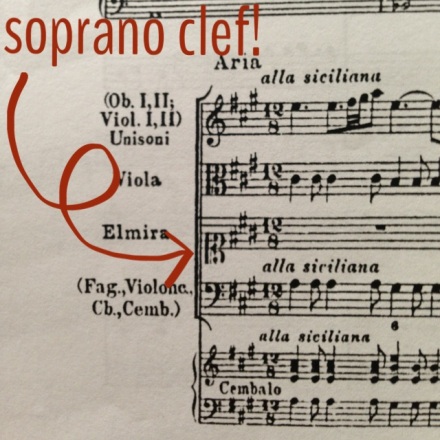 Everything’s just one line higher than it would be in your everyday treble clef, but it’s amazing how reading everything a third off from normal can make your head want to explode. I’m sure singing from soprano clef is one of those brain-exercising activities that can help you stave (oh heavens, no pun intended) off Alzheimer’s.

And I eventually get good at it. Actually I can sing the A section of “Liebe, sag'” just fine. But then the B section begins, and here come those 32nd-note runs:

Yikes is right. I can’t decide which would ultimately be more work, learning the whole aria in soprano clef, or teaching myself Finale and creating an edition I can read. It’s seriously a toss-up. I’ll let you know how it works out.

I'm a soprano and freelance writer based in Raleigh, NC. I travel a lot, to singing engagements around the country with ensembles from San Francisco’s American Bach Soloists to the Winston-Salem Symphony. I love singing, travel, food, nature and people, and writing about my experiences of them all. For more information, visit kathrynmueller.com or the About the Author page here on my blog.
Join 53 other followers