This week I’m heading to Chicago for two awesome concerts with Wayward Sisters. Lucky for me, I’ve missed the Polar Vortex, but it’s still going to be Chicago cold there, with wind chills in the single digits. And that means it’s time to break out my puffy down parka. 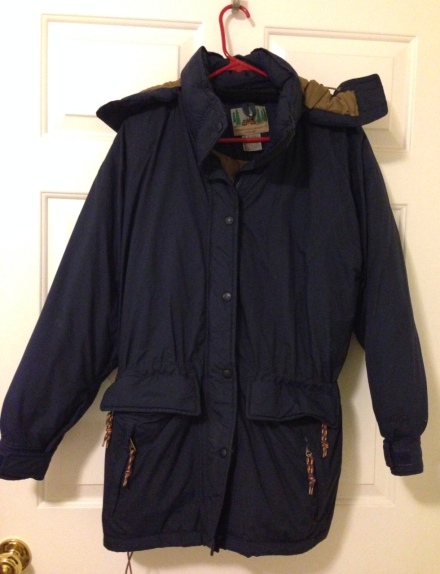 I’ve had this coat since the summer I graduated from high school. I grew up in cold places — the mountains of eastern Arizona and apple country in northern Rhode Island — but when I chose to start college at Northwestern University just outside Chicago I knew I’d have to prepare for a different kind of cold.

I headed to EMS at the Emerald Square Mall in North Attleboro. My friend Anthony happened to be working there that day, and he helped me choose the warmest possible coat to protect me from the single digits and brutal winds of Chicago’s winter. It worked. Back then I wore it with a huge fleece hat and full-size earmuffs underneath said hat. I survived an especially long, cold winter in Evanston thanks to my parka.

I ended up transferring to Brown after that year, and in Providence I only had to break out the puffy down parka for the few coldest days of the year. After one year in Boston post-college I headed south, and haven’t lived north of the Mason-Dixon since. The parka lives in my closet most of the time now, only making an appearance when I travel to far northern climes. The big fleece hat is long gone, and this month I’ll probably pair my parka with the woolen Peruvian hat I bought on a cold night in Querétaro, México four years ago:

Now they make parkas that are just as warm but more stylish and less, well, puffy. I suppose I could replace my trusty blue parka but it works great, has lots of pockets of just the right sizes and locations, and there’s nothing wrong with it.

Well, except for the fact that the zipper pull snapped off in the wash a couple years ago, and it now requires some complicated and dexterous maneuvering to get it zipped. But I’m loyal to my puffy down parka, and it’s taken me lots of places. Just in the past few years it has kept me toasty in Kalamazoo, Green Bay, Chicago, Minneapolis, South Bend, Milwaukee, and Moline. The coldest thermometer reading my coat and I have ever experienced was -15 one night in Green Bay.

with Seraphic Fire at Notre Dame

I’m not a person who needs four seasons. I’d be perfectly happy living somewhere where I could wear skirts and sandals 365 days a year. I hate the cold, but I know how to bundle up against it. And this week, bundle up I will.

the puffy down parka and a Dala horse in Minneapolis