In my lifetime I’ve probably flown through Dallas-Fort Worth International Airport over 100 times. I’ve never been outside the airport to experience the city it serves, but my singing travels take me through DFW sometimes ten or more times a year. I’d say I’m a pretty experienced DFW flyer.

So here’s my expert advice: if you have more than an hour’s layover, head to Terminal D. Even if neither of your connecting flights has anything to do with Terminal D. Terminals A through C are serviceable but there’s nothing nice about them. They have low ceilings, stale air, and restrooms too far apart. Terminal D, by contrast, is a great work of aviation architecture, or at least a nice place to spend an hour between flights. 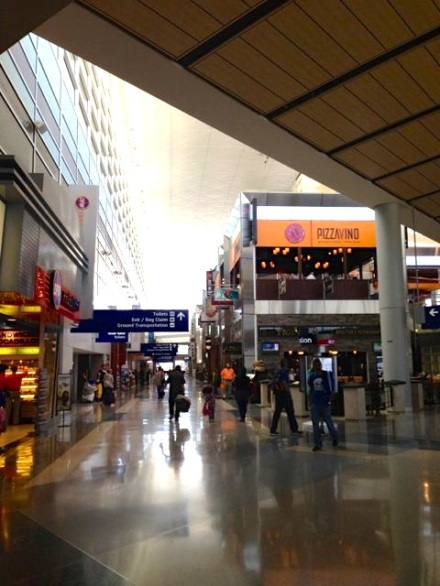 It’s airy and light, surprisingly quiet, and several degrees warmer than the aforementioned other terminals which force me to carry on a jacket just for my layovers. Terminal D has nice food selections, shopping options, and public art.

There’s even a section of comfy armchairs away from any boarding gate, but I forget exactly where that is and couldn’t find it today. Terminal D rivals Charlotte for pleasantness, and pleasantness is hard to come by during a day of air travel, unless you’re fancy enough to belong to an airline lounge.

In case my frequent repetition of its name hasn’t burned Terminal D into your brain, I have a simple mnemonic for remembering which terminal it is. Once I flew through Dallas with my friend Aryo and we had an argument about whether it was D or E that was the nice terminal. He may have been trying to get my goat, but he insisted it was E. I was 100 percent sure it was D. I told him, “D for delightful.” I was right, of course. I don’t mess around when it comes to Terminal D. As I began writing this post, I realized that one could also, more obviously, remember “D for Dallas.” So there you have it. One more travel day made more Delightful (or at least less oppressive) by DFW’s Terminal D.